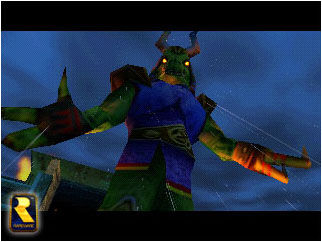 General Scales is the leader of the SharpClaw Tribe and a tyrannical despot at that.

At some point, the SharpClaws led by Scales attempted to become one of the leading tribes of Dinosaur Planet. However, they were denied a spot, instead losing out to the CloudRunner and EarthWalker tribes. While making himself relatively unknown to Scales, an unknown force managed to donate a bit of his power and presumably his knowledge to Scales, allowing for him and his tribe to declare war on Dinosaur Planet with new technology. He eventually raided Warlock Mountain, wiping out the EarthWalkers who were guarding the palace, although not without the EarthWalkers sensing the malevolent power behind Scales' assault. Eventually, he ambushes Krystal with his galleon, while she was looking for Princess Kyte, who was trapped on the Galleon and after his ship was heavily damaged, he met up with her after she managed to procure a key for the palace on Warlock Mountain and tried to kill her. At some point, he was met with resistance with a group composed of a EarthWalker, a HighTop, a ThornTail, and the CloudRunner who flew Krystal to Warlock Mountain, and defeated and captured them save for the ThornTail, who managed to escape.

At some point later, he led the SharpClaw army to war against the CloudRunner tribe and the other tribes on the Dinosaur Planet and was the one responsible for the break up of the planet by removing the Spellstones that stabilized the planet. Afterwards, he hunted down the GateKeepers to gain access to the floating pieces of the planet and he conquered each floating land mass one after another, as well as returning the Spellstones to their respective lands. Scales attempted to blackmail Garunda Te, the elder of the SnowHorn tribe, into opening the way to DarkIce Mines with the alternative of Scales committing genocide against the SnowHorns. Although Garunda Te still refused even at the cost of his tribe, his daughter, Belina Te, submitted to Scales and opened the gateway for him in order to save her race. Scales, true to his word, did not wipe out the race, but enslaved them instead and transported them to DarkIce Mines so they would be forced to work in the mines, and also had his minions seal away Garunda Te presumably as his punishment for resisting him. He later captured the CloudRunner Fortress and used it as his base of operations, as well as exiling the CloudRunner Queen to the main planet shortly after capturing her. Although he did not capture Walled City due to the King Earthwalker sealing away his gatekeeping powers, he did nonetheless return the Spellstone to the Walled City sometime beforehand and also released the RedEye tribe from their imprisonment, and likewise forced the EarthWalkers into hiding. He also captured Dragon Rock, and turned it into a prison facility for any enemies of his tribe. He also assigned members of his tribe to guard Moon Mountain Pass and the Cape Claw area due to their connection to the Force Point temples. He also arranged for Prince Tricky to be captured and held prisoner at Ice Mountain.

At some point, he became privvy to Sabre's and Krystal's arrival on the planet, and upon the CloudRunner queen's return to the CloudRunner Fortress, he captures her and interrogates her about their location. He then has her killed after she states that Krystal and Sabre will find him and destroy him. Shortly after Krystal reveals herself, he has Krystal captured, and takes away her staff. Scales eventually manages to break into the treasure room where the SpellStone was and retrieved it, although Fox managed to intercept the Spellstone.

Later revealed to be the holder of the last of the Krazoa Spirits, General Scales prepared himself to fight Sabre on Warlock Mountain, using some kind of sword.

As the general falls, he states "You will regret this," implying that he would return in a future title. However, since he is no where to be found, it is assumed that he has either died or has simply been knocked out and imprisoned by his fellow SharpClaw.

Retrieved from "https://dinosaurplanet.fandom.com/wiki/General_Scales?oldid=4656"
Community content is available under CC-BY-SA unless otherwise noted.