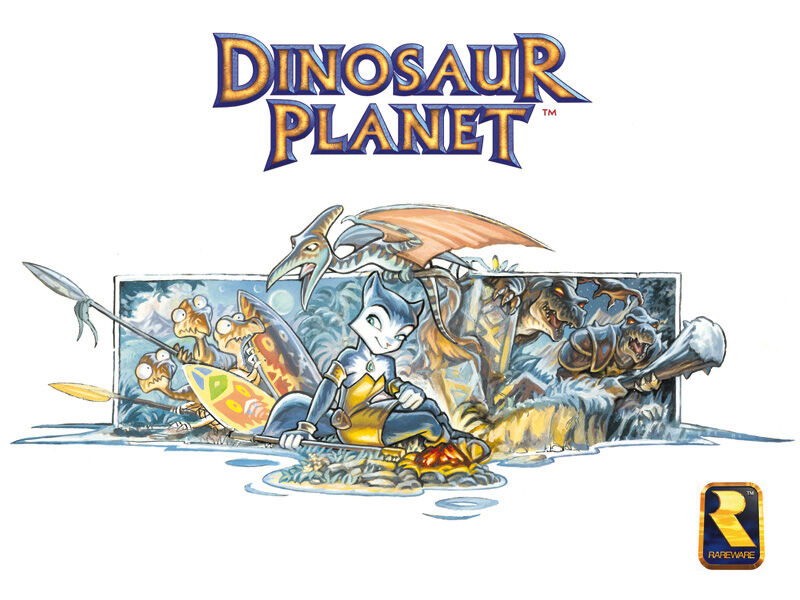 “Spread [the word] around. Make this game known. I don’t want this game to ever be forgotten, and [I] want to see a day when we can all play this game. Somebody out there has to have a copy of this game. Whoever you are, wherever you are, please consider allowing this game to be enjoyed by those who have been anticipating it for the last 12 years. Don’t let it be lost to time." ~supermariyo64, author of the Inside Dinosaur Planet videos (Part 1, Part 2).

Welcome to the Dinosaur Planet Wiki

NOTE: THIS WIKI IS NOT TO BE CONFUSED WITH THE 2003 DISCOVERY CHANNEL DINOSAUR DOCUMENTARY, DINOSAUR PLANET, WHICH CAN BE FOUND HERE: http://the-dinosaur-planet.wikia.com/wiki/The_Dinosaur_Planet_Wiki

Thank you for visiting our little Wiki! I am sure you wonder what Dinosaur Planet is.

Dinosaur Planet is a cancelled videogame for the Nintendo 64 that was being produced by Rareware who had a contract with Nintendo at that time. Dinosaur Planet was to be revolutionary, being saved on a high quality cartridge that allowed expressions on the characters, lip-synching and actual voiceacting throughout it's many cutscenes. It would've been the same kind of cartridge that the amazing classic, Conker's Bad Fur Day, which was also developed by Rare, was sold in.

The game was up to 80 - 90 % finished, but Nintendo did not like the idea of a No-Name title appearing and they were currently planning another Starfox title, but couldn't figure out a plot for it. Nintendo's owner, S.Miyamoto pointed out that the secondary protagonist of the game, Sabre, was very similar to Fox MccCloud from the Starfox series. (which he is not at all, really)

This caused Nintendo to force Rare to butcher the game to make it fit the mainsteam title, creating Starfox Adventures. Starfox Adventures is crammed with glitches, plotholes and other nonsensical things as the deadline was nearing, thus Starfox Adventures was never able to become a good title. Rare mourns the loss of Dinosaur Planet and after over twelve years this title has never been forgotten.

This Wiki attempts to compile all possible information found of the game to hopefully re-create what Starfox Adventures could've been without Nintendo's betrayal. New information continues to appear even twelve years after the game was scrapped and it is possibly the greatest videogame that was ever lost to a game company's greed.

Since Dinosaur Planet information is Rare, (pun not intended), unknown information will be replaced with the Starfox Adventures storyline until that plot-hole is filled. Fan-content is only allowed on pages of fan-characters on the series. Fancharacters are allowed, but they MUST be indicated as fancharacters and shall not be written into the official Dinosaur Planet articles. Your character's history must stay within your fancharacter's page! When inserting a speculation or a theory it must be CLEARLY specified that it is a fan-made solution! All pages must be protected from un-registered and new users after being finished!

Retrieved from "https://dinosaurplanet.fandom.com/wiki/Dinosaur_Planet_Wiki?oldid=4431"
Community content is available under CC-BY-SA unless otherwise noted.